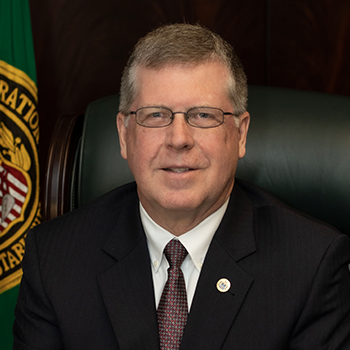 
"I think all the board members that I've been involved with over the years really become engaged and understand what the mission is with Farm Credit Administration."

Jeffery S. Hall was appointed to the FCA board by President Barack Obama on March 17, 2015. Succeeding Leland A. Strom, Mr. Hall will serve a term that expires on October 13, 2018.

Mr. Hall also serves as chairman of the board of directors of the Farm Credit System Insurance Corporation, an independent U.S. government-controlled corporation that insures the timely payment of principal and interest on obligations issued jointly by Farm Credit System banks.

Mr. Hall was president of The Capstone Group, an association management and consulting firm that he co-founded in 2009. He was the state executive director for the U.S. Department of Agriculture’s Farm Service Agency in Kentucky from 2001 to 2009. In that role, he had responsibility for farm program and farm loan program delivery and compliance.

From 1994 to 2001, Mr. Hall served as assistant to the dean of the University of Kentucky, College of Agriculture, advising the dean on state and federal legislative activities and managing a statewide economic development initiative called Ag-Project 2000.

Mr. Hall also served as a senior staff member in the office of U.S. Senator Mitch McConnell from 1988 until 1994. During that time, he was the legislative assistant for agriculture, accountable for internal and external issue management.

Mr. Hall was raised on a family farm in southern Indiana, which has been in his family for nearly 200 years. He is currently a partner in the farm with his mother and sister. Mr. Hall received a Bachelor of Science from Purdue University.