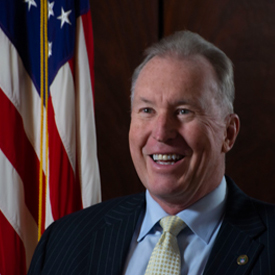 
"I absolutely know first hand the importance of credit to your typical farm operation."

Glen R. Smith was designated FCA board chairman and CEO of the Farm Credit Administration by President Donald Trump on July 17, 2019. He served in this position until Oct. 21, 2022. Mr. Smith has been a member of the FCA board since December 2017. Although his board term expired on May 21, 2022, he will continue to serve on the board until his successor has been named.

He also serves as a member of the board of directors of the Farm Credit System Insurance Corporation, an independent U.S. government-controlled corporation that insures the timely payment of principal and interest on obligations issued jointly by Farm Credit System banks.

Mr. Smith is a native of Atlantic, Iowa, where he was raised on a diversified crop and livestock farm. His farm experience started at a very early age, after his father was involved in a disabling farm accident. He graduated from Iowa State University in 1979 with a Bachelor of Science in agricultural business and accepted a position with Doane Agricultural Services as state manager of the company’s farm real estate division.

In 1982, Mr. Smith and his wife, Fauzan, moved back to his hometown and started farming and developing his ag service business. Today, their family farm, Smith Generation Farms Inc., has grown to encompass about 2,000 acres devoted to corn, soybeans, hay, and a small beef cow herd.

Mr. Smith is founder and co-owner of Smith Land Service Co., an ag service company that specializes in farm management, land appraisal, and farmland brokerage, serving about 30 Iowa counties. From 2001 to 2016, he was also co-owner and manager of S&K Land Co., an entity involved in the acquisition, improvement, and exchange of Iowa farmland. Mr. Smith has served on numerous community, church, and professional boards. He was elected to the Atlantic Community School Board of Education on which he served for nine years.

In 1990, he earned the title of Accredited Rural Appraiser from the American Society of Farm Managers and Rural Appraisers. In 2000, he served as president of the Iowa chapter of that organization. He is a lifelong member of the Farm Bureau, Iowa Corn Growers Association, Iowa Soybean Association, and Iowa Cattlemen’s Association.

The Smiths have four grown children and five grandchildren. Three of their children are directly involved in production agriculture. Their son Peter has assumed managerial responsibilities for both the family farm and business.